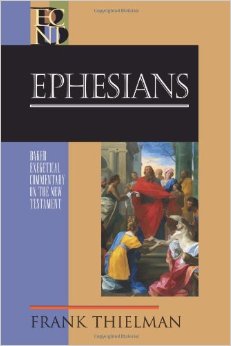 Few times in the New Testament does Paul refer to slaves obeying their masters. One case in point would be in Ephesians 6.5-8, “Slaves, obey your earthly masters with fear and trembling, with a sincere heart, as you would Christ, not by the way of eye-service, as people-pleasers, but as servants of Christ, doing the will of God from the heart, rendering service with a good will as to the Lord and not to man, knowing that whatever good anyone does, this he will receive back from the Lord, whether he is a slave or free.“

Frank Thielman, in the BECNT volume on Ephesians, gives an example of commentators who thought Paul didn’t disapprove of slavery.

Is it often said that this passage accepts unquestioningly the institution of slavery as it existed in the first century. ‘There is doubtless no approval, but at the same time no disapproval of the existing slavery in itself,’ said Meyer (1880:318) long ago, and most commentators would agree with him. Some recent interpreters go further and see in the passage not merely an acceptance of slavery but also an attempt to provide theological support for the institution, particularly as it benefited the slaveholder [Glancy 2006; Harrill 2006] (404).

However Thielman disagrees, “Surprisingly, [Paul] then tells masters to do for their slaves what he has just required slaves to do for their masters (6.9a), and again he finishes with a clause that gives the reason why masters should do this: they too have a master, and he is no respecter of persons (6.9b-c).”

Slaves are to obey their masters, as the children are to obey their parents (Eph 6.1). Yet Paul deems these masters as ‘fleshly’, subtly indicating there is a greater Master, that of Jesus Christ himself, the One to whom the loyalty of a believing slave ultimately lies.

Like when Paul come to Corinth, he recognized his weak and subordinate position among the Corinthians (1 Cor 2.3; 9.19).

4. Slaves are Not to Obey Merely When the Master’s Eye is on Them, But as Slaves of Christ, “Committed to the Will of God”

Paul emphasizes the importance of sincerity and honesty in one’s dealings with others (2 Cor 1.17-18; 2.17; 3.2; 4.2). It is acting sincerely and according to one’s inner convictions, something highly valued in Greco-Roman and Hellenistic (Greek) Jewish ethics.

5. Slaves Should Do Their Assigned Work With “Good Will”

Paul understands that there are injustices within the institution of slavery, and so “urges slaves to consider their obedience as ‘rendered to the Lord'” (407).

The slave can know that whatever good he does, in honor of the Lord, will be “repaid/given back” to him by the Lord (6.8), something true to both slave and free.

And We Can’t Forget the Masters…

Paul goes on in Eph 6.9, “Masters, do the same to them, and stop your threatening, knowing that he who is both their Master and yours is in heaven, and that there is no partiality with him.“

Paul gives one verse to the masters because he intends for them to follow the same instructions given to the slave. But who is the master’s master? Jesus Christ.

Within a traditional Greco-Roman household, how can believers “live wisely, do the Lord’s will, grow in maturity as human beings, and live in the Spirit (5.15-18)”? Both are now free in Christ to choose righteous attitudes and actions.

Paul undermines the whole system of slaveholding, as these slave-holding believers are, in a way, to submit to their slaves (5.21), serving them in the same way they desire their slaves to serve them.

As the notes [above have explained], however, this passage is more radical than the account of it given in either of these readings [by Meyer, Glancy, and Harrill in the above quote]. There is no explicit criticism of slavery here, but the level of mutuality and reciprocity that is assumed to exist between master and slave creates an atmosphere in which it would have been difficult for slavery to survive if the advice of the passage had been rigorously followed. The problem that the passage highlights is not its own failure to rise above this brutal and ubiquitous [ever-present] institution, but the failure of those who received the passage as authoritative both in antiquity and in more recent times to live out its radical implications (404-405; emphasis mine).

One thought on “Was the Apostle Paul “Pro-Slavery”?”