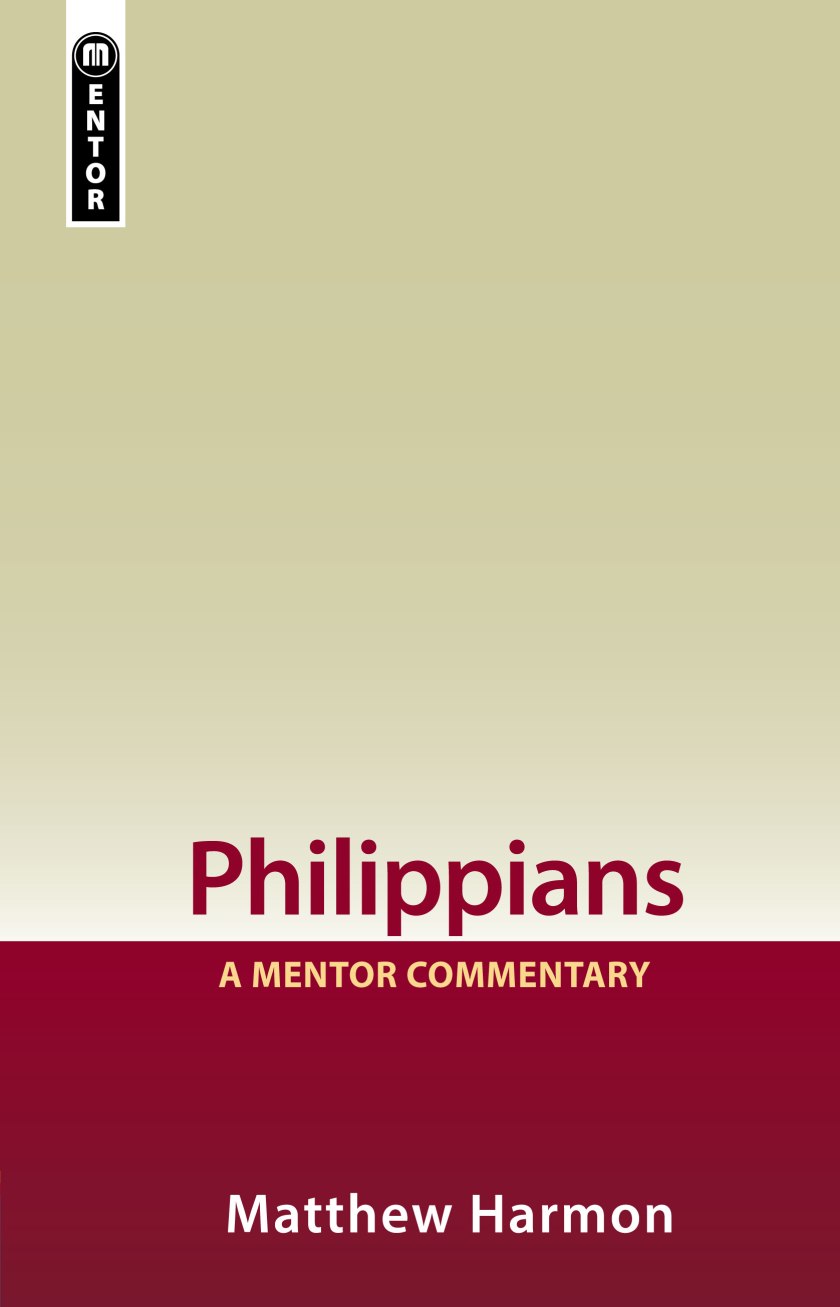 In signing up for my first Bible college semester in York, one of the classes to be taught by my (now) good friend Lindsay Kennedy was Job. Since Job is a big book, I knew that by taking it as a semester class I would get at least a bird’s-eye view of the book. However, about a week before leaving for York, the class changed to Philippians/Colossians, and I was pretty disappointed ( – just think of how many sermons you’ve heard on Philippians/Colossians, and then how many you’ve heard on each chapter of Job). But that disappointment left as soon as I entered the classroom.

Even still, Philippians has never been a book that’s been on my radar. There are parts of it that still stumped me, but it still never really caught my interest. And most Philippians commentaries haven’t had the right pull for me to look into Philippians. That is, until Matthew Harmon’s commentary in the Mentor series came out.

In his Introduction, Harmon covers topics like authorship, information on the city of Philippi and its citizens, Paul’s circumstances, and where he wrote the letter from. He looks at the unity of the letter, the purpose, and the false teachers. He summarizes key themes of the book such as the Gospel, Jesus Christ, the Day of Christ, Joy, Already/Not-Yet, the Use of the OT, Adam-Christ, the Isaianic Servant, and more. It’s a huge benefit having this summary in the beginning, especially when it’s as well written as it is here.

The rest of the commentary covers Philippians like an ordinary commentary would. Harmon goes through the text until he gets to the end. It basically laid out how you would expect. There are a few tables and charts. One helpful section for pastors is the “Suggestions for Preaching/Teaching and Application” at the end of each chapter. These sections aren’t very long (about a page or so), but any amount from Harmon is helpful.

But this isn’t the only place to find application. It’s scattered all throughout the commentary. When speaking about having always obeyed Paul in his presence and absence (2.12), Harmon says,

But what is remarkable about Paul’s statement is that the Philippians’ obedience was even more diligent in his absence than in his presence. Human nature would suggest quite the opposite. Children are much more likely to obey their parents when in the same room than when their parents are out of sight. Drivers are far more likely to obey the speed limit when a police car is visible than when there is none in sight.  But obedience when no authorities are visible is an excellent evidence of a heart that desires to truly submit to authority out of joy…. Their obedience… is evidence of the work of God’s Spirit transforming them into the image of Jesus Christ, the pre-eminently obedient one (241).

In each chapter, Harmon gives the verse followed by the commentary on the verse. Instead of quoting words from the verse, Harmon puts them in bold print. This makes it easier to find when he’s speaking on the verse, and you’re eyes aren’t confused by seeing an array of quotation marks.

1.17, the preachers teach the gospel but it is their motives the are false. Their attitude of selfish ambition doesn’t match Paul’s command in 2.3. Paul brings up the two parties of 1.15-17 because this may reflect a problem in Philippi, a lack of unity, humility, and servanthood. They are not in the same category as those spoken of in 1.27-30, 3.2, or 3.18-21.

3.1, hearing “finally” here sounds odd to us English speakers, and a number of scholars that that chapters 3-4 are a separate letter. But Harmon says the Greek expression “has the sense of ‘as far as the rest is concerned, beyond that.’ It signals that Paul is moving on from describing his plans to send Epaphroditus and Timothy to a new section of exhortation.”

Harmon follows Paul’s argument, and is sensitive to the surrounding context, not only of Philippians, but of the entire Bible.

In 3.20, unlike the enemies of the cross who focus on earthly things (3.18-19), the Philippians are to lead lives that represent “their true homeland and lead lives worthy of their citizenship” in God’s kingdom (379). Harmon lets the rest of Scripture inform us on this heavenly citizenship: this reality is the “Jerusalem above” (Gal 4.21-5.1; cf. Isa 54.1) that will descend from heaven (Rev 21-22). While through the Holy Spirit we are raised and seated with Christ in the heavenly places (Eph 2.6), the focus of of this verse is “on the future consummation of that citizenship in the new heavens and earth” (380).

Most certainly. Rather than giving the reader what every other commentator says about every passage (which Harmon leaves in the footnotes), Harmon deals with the text, what’s going on, and what it means. He follows the argument, is sensitive to the context of the letter, Paul, and the Bible. This is a perfect resource for students, laymen, teachers, Bible studies, pastors, and all in between. Harmon is solid and easy to read. Though I know they can’t all be like this, I wish more commentaries were this enjoyable to read.

Buy it on Amazon or at CFP!

(Special thanks to Christian Focus for sending me this book for review! I was not obligated to provide a positive review in exchange for this book).