When it comes to telling a story or a joke, the way you tell it is just as important as the words you use. You introduce the story and the characters, bring in some seemingly unresolvable tension, build up to the climax, and resolve all (or most) conflicts. Within your story, there are patterns of repetition, themes, and motifs that are meant to teach you about a particular character (or characters) and how they act, interact, and react to characters and elements of the story. One common way of telling a story in the Bible is by the use of a chiasm, where, like the Greek letter Chi (Χ), the story can be laid out in a half-X shape with the center as the climax. 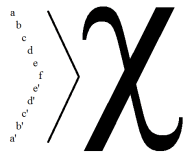 One example from a well-known phrase today would be with lions, tigers, and bears.

Gracie went to the zoo. She soon saw lions, and tigers, and bears. She shrieked, “Oh my!” Feeling frightened, she ran back past the bears, tigers, and lions. Soon after, Sue left the zoo.

As a chiasm, the main points could be:

It’s not really the main idea, but any one who’s ever had children or has babysat knows that the “Oh my!” is the highlight of this saying.

Why Green Eggs and Ham?

In an Appendix from a dissertation by David Heath titled “Chiastic Structures in Hebrews: A Study of Form and Function in Biblical Discourse” he writes how the well known Dr. Seuss book Green Eggs and Ham can be laid out as a chiasm. See if you can see why the center is so important.

wB  Do you like green eggs and ham? … [response]

wwC  Would you like them here or there?… [response]

wwwD  Would you like them in a house… with a mouse?… [response]

wwwwE  Would you like them in a box? Would you eat them with a fox?…
wwww[response]

wwwwwwwwI  Would you, could you, in the rain? … [response]

wwwwwwwwwJ  … Would you, could you, with a goat? … [response]

wwwwwwwwwwK  Would you, could you, on a boat? … [response]

wwwwwwwwwwL’  Sam! If you will let me be, I will try them.
wwwwwwwwwwwYou will see. [tries them] Say!
wwwwwwwwwwwI like green eggs and ham!

wwwwwwwwwwK’  And I would eat them in a boat.

wwwwwwwwwJ’  And I would eat them with a goat…

wwwwwwwwI’  And I will eat them in the rain.

wwwwwwwH’  And in the dark.

wwwwwwG’  And on a train.

wwC  Here or there?

wwwD  In a house? with a mouse?

wwwwwF  In a car? You may like them. You will see. In a tree?

wwwwwwwwwwL  You do not like them. Try them!
wwwwwwwwwwwwAnd you may, I say.

wwwwwwwwwwL’  I will try them. You will see.
wwwwwwwwwwwwSay! I like green eggs and ham!

wwC’  Here and there.

wB’  I do so like green eggs and ham!

Main Idea: The main idea is seen in L/L’ = Taste and see that green eggs and ham are good!

P.S. – I’ve actually had green eggs on an outreach to Stockport once. The team leaders and one of the other girls put in a bit too much seasoning and the eggs turned green. I tasted, but unfortunately they were not good. There was also no ham.

Main Sub Idea: Even Dr. Seuss can teach us to read the Bible.

After while I’ll show a few biblical examples so that you can see why knowing this would be important. In his (surprisingly) excellent book on Leviticus, Michael Morales has quite a few examples on how Leviticus 16’s Day of Atonement is the center of the Pentateuch. Perhaps I can get a hold of that chapter somewhere since I don’t have the book on me.

2 thoughts on “Dr. Seuss and Chiasms”