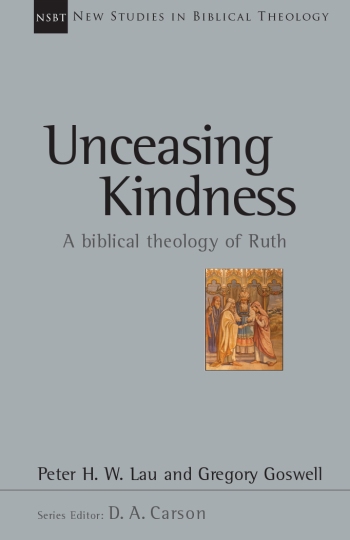 For such a short book, I’ve always found the book of Ruth to be quite perplexing. Why does she remain with Naomi, the “bitter” woman? Then she meets Boaz, and for some reason is at his feet very late at night so of course she asks in a roundabout way if he will marry (“redeem”) her. But there’s a closer relative who could be the kinsman redeemer. He doesn’t foot the bill, so Boaz takes Ruth to be his wife, and eventually we get King David. And, of course, Christ is our kinsman redeemer. Why? Just because Boaz marries (and redeems) Ruth and now she has a child and land? How do we see that in what Christ does? In the book of Ruth, everything occurs ever so naturally. It’s too natural.

As a new volume in the New Studies in Biblical Theology series, Lau and Goswell’s volume on Ruth does what commentaries don’t have space to do. They look at Ruth in light of it’s canonical placement(s)—yes, there are three different placements where Ruth is found in various manuscripts. Lau and Goswell focus “on the meaning of the text as intended by the author for [the] original hearers, but mindful of the fact that the book as we have it is set within a wider context of Scripture” (1). These include not only the books around Ruth, but the entire biblical canon. Both major and minor themes from Ruth are examined, with many reoccurring in multiple chapters. These major themes are redemption, kingship, and mission; the minor themes/motifs are kindness, wisdom, famine, refuge, seed, doxology, and the hiddenness of God and human agency.

Chapter 1 sets the goal for the book: focusing on Ruth as the author intended and through the wider lens of Scripture (as the Author intended), setting Ruth up against Jesus, “the midpoint and endpoint of salvation history,” and discussing Ruth’s themes in light of the canon of Scripture (3).

In Chapter 2, the authors examine how those in the early restoration period (during the time of Ezra-Nehemiah) would have read Ruth. Some scholars argue that Ruth contradicts Ezra and Nehemiah, due to their insistence on breaking up exogamous marriages and their using Torah to exclude, restrict, and threaten the Israelites. By placing Ruth next to Ezra-Nehemiah and actually looking at what the text says, these issues fall apart. We also see how Ruth encourages Israel with the promise of the Davidic king, God’s seemingly-silent but all pervasive presence, and that they are not left to their own devices, but God is with them and is sovereign above the Persians.

Chapters 3-5 portray themes in relation to the OT contexts. At these angles, we can see similarities and differences between Ruth and the books ‘she’ is placed among. When it comes to the question of the correct canonical position of Ruth, Lau and Goswell say that “There may be no right or wrong answers to that question; rather the point is that the differing canonical positions make a difference to how one views and reads a book” (23).

Chapter 3 compares Ruth with it’s placement in the LXX (and in our English Bibles) in between Judges and Samuel. Ruth answers the question over how Israel will conquer their lack of a king (Judg 21.25).

Chapter 4-5 compares Ruth with it’s placements in the Hebrew scriptures. In some manuscripts, Ruth comes after Proverbs. With similar wording, Ruth is like the wise woman of Proverbs 31. She doesn’t “destroy kings” (Prov 31:3), but instead builds up the Israelite kingdom (Ruth 4.17, 21). Both show kindness (Prov 31.26; Ruth 3.10) and are praised by their husbands as being superior (Prov 31.28-29; Ruth 3:10-11). In Proverbs 1-9, the foil to Lady Wisdom is the adulteress, an Israelite woman who acts like a foreigner seeking to devour any man who will come into her. Yet Ruth is a foreigner who acts like an Israelite, seeking to know Yahweh and live righteously before all.

In Chapter 5, the authors examine how in the Babylonian Talmud (Baba Bathra 14b), Ruth comes before the Psalms. Boaz commends Ruth for taking “refuge” under the “wings” of the Lord, a motif found throughout the Psalter (Pss 17.8; 61.4; 91.4). We see that “the ancestress of the chief psalmist anticipates the piety of David, who calls on God to defend and help him in his troubles” (61). It would be wrong to think that in the psalms we should try to separate the historical from the poetical, for both interpret each other. The theology of the OT is seen in God’s “kindness” and remembered in his historical acts.

Chapter 10 concludes with summarizing each chapter and reminding the reader (and themselves) that ethics is not to be quarantined off from Old Testament narratives. “Who God is and how he acts (theology) has moral implications (ethics)” (165).

Chapter 2 was a unique chapter. While the other chapters are associated with themes and canonical placement, here Ruth is placed in conversation with Ezra and Nehemiah. While I did have some difficulty remembering what this chapter had to do with Ruth (Ezra-Nehemiah get more face time than Ruth), it exampled how God’s word does not contradict itself, but instead illuminates the text and nuances how we are to think about God’s word. All three books emphasize a relationship with God through human acts of generosity and kindness. If people say the Bible contradicts itself, ask them if they’ve done their homework.

I don’t know when I learned that the books of the Bible were ordered differently in the MT and LXX, but it was Stephen Dempster who introduced me into seeing a theological rational behind that ordering (in the Babylonian Talmud). In their volume on Ruth, Lau and Goswell go further than Dempster and examine Ruth through the lens of the different orders of the canon (i.e., MT, Babylonian Talmud, and LXX) and the books that surround Ruth in those respective sequences. While I must say that some of the canonical information was difficult to read, and has left me with even more questions, this was extremely beneficial and an excellent work of interpreting Scripture with Scripture. Lau and Goswell are careful interpreters, and I would enjoy seeing more books on the biblical canon and their relationship to those books which surround them in each of the canonical sequences.

Ruth has long been a mystery to me, but Lau and Goswell have done me (and the church) a service with this book. This book isn’t for the average person in the pew, but it for those who are well read and who want to study deeply the book of Ruth. Pastors and teachers should get a hold of this volume also. They won’t preach all of the details, but they will see the books where Ruth appears, making the unity of the Bible more pronounced in the minds of the congregation.

Disclosure: I received this book free from IVP Academic. The opinions I have expressed are my own, and I was not required to write a positive review. I am disclosing this in accordance with the Federal Trade Commission’s 16 CFR, Part 255 http://www.access.gpo.gov/nara/cfr/waisidx_03/16cfr255_03.html.