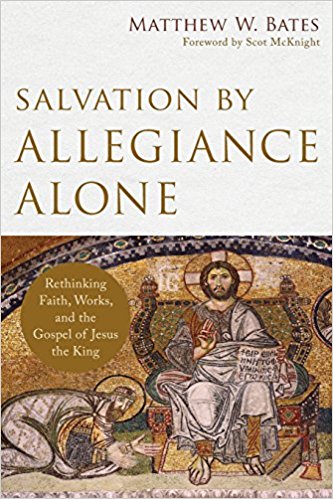 Matthew Bates, Associate Professor of Theology at Quincy University in Quincy, Illinois, is the author of The Birth of the Trinity (which I will be reading soon). Seeking to serve both the church and academy, he co-hosts OnScript, a podcast dedicated to interviewing scholars over their books to pique the interest of many.

What is “faith”? More so, what does it take to be saved? Acknowledging that although you are a sinner, God sent his one and only Son to die on a cross for your sins? Then, after his resurrection, he ascended to the Father and will return to gather up his people one day? Is it only belief in those core facts that makes someone a new creation? The biblical authors (see James 2.14–18) would disagree.

Throughout his book, Bates puts forth that pistis (“faith”) is better understood within the umbrella-term of “allegiance” instead of “faith,” “belief,” and “trust.” Now, nowhere does he says that pistis should always be translated as “allegiance” (78), but it is more than mere mental assent. We don’t need to stop using “faith, and “belief,” but allegiance is “the best macro-term available to us that can describe what God requires from us for eternal salvation” (5).

Faith is not opposed to evidence. We need not make leaps of faith to believe God nor should we fear intellectual study. Faith does not oppose works of all kinds (cf. Eph 2.10; 2 Tim 2.21; 3.17), nor believing all will just happen to go well. We believe and thus preach the “good news about the enthronement of Jesus the atoning king” (30). We live under that eternally reigning King, and we will be judged for how we live (2 Cor 5.10).

Preaching allegiance to the eternal reigning King is not legalistic, for the Apostle Paul preached the very same thing.

Rom 1.5, through whom we have received grace and apostleship to bring about the obedience of faith for the sake of his name among all the nations.

Rom 16.26, but has now been disclosed and through the prophetic writings has been made known to all nations, according to the command of the eternal God, to bring about the obedience of faith—

Acts 26.20, but declared first to those in Damascus, then in Jerusalem and throughout all the region of Judea, and also to the Gentiles, that they should repent and turn to God, performing deeds in keeping with their repentance.

Bates is not the only scholar to emphasize loyalty. In Supernatural, Michael Heiser says, “Salvation is about believing loyalty—trusting what Jesus did to defeat Satan’s claim and turning from all other gods and the belief systems of which they are a part” (125). In his commentary on Deuteronomy, Dan Block says,

Answering to the Supreme Command, by uttering the Shema the Israelites were declaring their complete, undivided, and unqualified devotion to Yahweh. This is not strictly a monotheistic confession (cf. 4:35, 39) but a cry of allegiance, an affirmation of covenant commitment that defines the boundaries of the covenant community. It consists of those who claim this utterance as a verbal badge of identity and who demonstrate this identity with uncompromising covenant commitment… (182).

So, is allegiance a better way to understand pistis than the long-held “faith”/“belief”?

First, I don’t think all of the verses Bates uses as support are so helpful. Consider his translation of Romans 5.1, “Therefore, since we have been justified by allegiance, we have peace with God through our Lord Jesus Christ.” Were we justified when we believed/trusted Christ as King or when we trusted and then acted upon it? Wouldn’t trust imply that we will act upon our beliefs? Bates says that the “metaphors [of ‘belief’ and ‘trust’] are best adjusted and subsumed within the richer category of allegiance. Consistent trust in situations of duress over a lengthy period of time is allegiance” (90).

Maybe it is my own myopia, but I fail to see how mental assent comes under the doing of allegiance. One must believe before he can do. One must mentally “assent” to Christ as King before he can follow in his steps.

Ephesians 2.8, “For by grace you have been saved through allegiance. And this is not your own doing; it is the gift of God.” However, if we have been saved by allegiance, this surely sounds like our own doing. Although Bates admits that “even the ability to render allegiance to Jesus as king is a gift” (172), this seems to confuse more than clarify.

Hebrews 11.1, 3 say, “Now faith is the assurance of things hoped for, the conviction of things not seen…. By faith we understand that the universe was created by the word of God….” As the author continues, the remaining 22 uses of faith seem to focus on “belief”/mental assent rather than allegiance (though without excluding obedience/allegiance).

In 11.4, both Cain and Abel offered sacrifices, but it was by Abel’s trust/faith in God that he offered a better sacrifice. Noah, warned of impending doom, trusted God (and obeyed, Gen 6.22). Joseph (Heb 11.22), at the end of his life, trusted God’s promises of land and genealogy made mention of Israel’s future exodus. In 11.28, Moses trusted Yahweh’s promise that obeying the Passover instructions would protect them from the Destroyer’s touch (a trust which included obedience).

As a reminder, Bates doesn’t say allegiance is always the best way to translate pistis, but throughout Hebrews 11 it seems that the main focus is on heroes who trusted God and thus acted upon that trust.

There’s not much new here, though his book is a helpful emphasis on loyalty to our King. Bates rightly makes the case that faith should not be left in the ether; it is expressly shown in our daily actions as we serve our righteous King. However, these actions, while expressing allegiance to our King, are subsumed under the overarching idea of our mental assent and understanding of what God has down for us in Christ. The teachings in this book would be helpful when correcting a brother or sister who creates a habit in saying, “Go in peace, be warmed and filled,” and for encouraging those who might have forgotten (or just not realized) the importance of loyalty. While allegiance is an important facet of our loyalty to our King, I still believe that sola fide, “faith alone,” is a better way to understand our salvation.

Disclosure: I received this book free from Baker Academic through the Baker Academic Bloggers program. The opinions I have expressed are my own, and I was not required to write a positive review. I am disclosing this in accordance with the Federal Trade Commission’s 16 CFR, Part 255 http://www.access.gpo.gov/nara/cfr/waisidx_03/16cfr255_03.html.