Sermon on the Mount

In his new book The Sermon on the Mount and Human Flourishing, Jonathan Pennington says that in the Gospel of Matthew, “Matthew’s literary skill is all about structure” (106). When comparing Matthew’s stories of Jesus’ healings and miracles with the two other Synoptic Gospels, Matthew generally gives shorter retellings. Throughout the Bible, structure is often just as important as what is said.

The biblical authors didn’t use chapter headings, (parentheses), italics, bold, or different colors to frame different sections. They often used words and themes in a literary technique called an inclusio. Why does this fancy word matter?

Imagine holding a dark, rustic 5×7 picture frame. You intend to hang your annual family Christmas photo (the serious one) in your living room. You are not going to put a 3×5 picture in a 5×7 frame—that would look silly. Neither will you try to cram a 5×7 picture into a 3×5 frame; that would destroy the picture and tell people that you don’t care for your property (and that you have bad taste!) Because you appreciate aesthetics, you place your 5×7 annual family photo into that dark, rustic, 5×7 picture frame. The smooth frame matches the pleasant picture. It fits (while your silly Christmas picture will go into the neon frame).

Matthew’s skill isn’t seen in telling elaborate stories. Pennington says he “appears to be less concerned with the individual narratives per se than with how these stories fit together in conjunction with major teaching blocks to tell a larger story” (106). Matthew presents the message of his Gospel through the shape of his Gospel. He frames texts with intentionality. Beginning with the whole Gospel of Matthew:

28.18 And Jesus came and said to them, “All authority in heaven and on earth has been given to me. 19 Go therefore and make disciples of all nations, baptizing them in the name of the Father and of the Son and of the Holy Spirit, 20 teaching them to observe all that I have commanded you. And behold, I am with you always, to the end of the age.”

In Genesis 12.1–3, Yahweh commissioned Abraham to be a blessing to the nations. Although Matthew doesn’t cite Abraham’s name at the end of his book, through the death and resurrection of Jesus, the true King, the new “David,” his disciples receive the commission to proclaim his kingship to every nation that they would be converted and would follow him, continuing his line (or “genealogy”).

The Presence of Christ

1.23  “Behold, the virgin shall conceive and bear a son, and they shall call his name Immanuel” (which means, God with us).

18.20 For where two or three are gathered in my name, there am I among them.”

Three times Matthew states that Jesus (or God) will be with his people. The presence of Christ frames the text, and it is the proclamation of his present-and-coming kingdom which brings a separation among humanity seen throughout Matthew’s Gospel (110).

The Gospel of the Kingdom (of God)

Narrowing our search down, it is well known that there are five major blocks of teaching in Matthew. The Sermon on the Mount (Matt 5–7) is located within a larger block of narrative (4.17–9.38).

4.17 From that time Jesus began to preach, saying, “Repent, for the kingdom of heaven is at hand.”

4.23 And he went throughout all Galilee, teaching in their synagogues and proclaiming the gospel of the kingdom and healing every disease and every affliction among the people. 24 So his fame spread throughout all Syria, and they brought him all the sick, those afflicted with various diseases and pains, those oppressed by demons, those having seizures, and paralytics, and he healed them. 25 And great crowds followed him from Galilee and the Decapolis, and from Jerusalem and Judea, and from beyond the Jordan.

9.35 And Jesus went throughout all the cities and villages, teaching in their synagogues and proclaiming the gospel of the kingdom and healing every disease and every affliction. 36 When he saw the crowds, he had compassion for them, because they were harassed and helpless, like sheep without a shepherd. 37 Then he said to his disciples, “The harvest is plentiful, but the laborers are few; 38 therefore pray earnestly to the Lord of the harvest to send out laborers into his harvest.”

This block of narrative (4.17–9.38) is framed by a call to repentance, a prayer for more laborers (disciples), and the phrase “the gospel of the kingdom.” Pennington says this whole section is “to be read as one unit, the theme of which is the call to discipleship (through repentance) that comes from the coming of the kingdom of heaven” (114).

The Sermon is meant to be read as the explanation of what it means to live according to God’s coming kingdom” (114). The Sermon is the perfect example of an “exposition of what repentance toward God and his Fatherly reign looks like (4:17), of what the life of discipleship looks like” (114).

The “New Law” of the Sermon

5.1 Seeing the crowds, he went up on the mountain, and when he sat down, his disciples came to him. 2 And he opened his mouth and taught them, saying:

[The Sermon on the Mount]

7.28 And when Jesus finished these sayings, the crowds were astonished at his teaching, 29 for he was teaching them as one who had authority, and not as their scribes. 8.1 When he came down from the mountain, great crowds followed him.

The Sermon itself is framed by Jesus ascending up the mountain (5.1–2) and descending down the mountain (7.28–8.1). Jesus, the greater Moses, taught the people what it should look like to live in God’s kingdom. He spoke with authority, unlike the scribes who pretend to have Moses’ authority (23.2).1

The Law and the Prophets

Pennington provides a three-fold outline to the Sermon:

The Body of the sermon is framed by the phrase “the Law and/or the Prophets.”

7.12 “So whatever you wish that others would do to you, do also to them, for this is the Law and the Prophets.

Pennington says that the theme of the sermon is “greater righteousness.” To be a repentant and forgiven disciple in God’s kingdom, and to be in covenant with God and to know his word (Ps 1.1; 2.12), is to live life as it was meant to be lived. It is a “whole” life; it is a flourishing life (cf. the blossoming, fruitful tree by the rivers of water in Ps 1.3, which resonates Garden of Eden imagery). The Pharisees were hypocrites who performed the right actions but with evil hearts. To have “greater righteousness” is to be whole and complete like the Father in heaven (5.48). It is to be “pure in heart” (5.8). It is to follow God’s instructions both outwardly and inwardly. Christ fulfilled the law, and we live under the law of Christ (1 Cor 9.21; Gal 6.2).

Rewards from the Father in Heaven

6.1 “Beware of practicing your righteousness before other people in order to be seen by them, for then you will have no reward from your Father who is in heaven.

6.19 “Do not lay up for yourselves treasures on earth, where moth and rust destroy and where thieves break in and steal, 20 but lay up for yourselves treasures in heaven, where neither moth nor rust destroys and where thieves do not break in and steal. 21 For where your treasure is, there your heart will be also.

Here, point two of the Body is framed by a few words/ideas. Both sides speak about rewards/treasures either from God in heaven or with the treasure being in heaven. Good deeds are not to be done to impress people (on earth), but to honor God who is in heaven. The Pharisees, who do not have pure hearts, want to receive all of the honor (as do the scribes, for they sit in the “seat of Moses,” 23.2), yet they give none to God. They will obtain no reward from the Father (vv. 4b, 6b, 18b) for they perform their pious acts in public to gain honor from others who see them (vv. 1, 2, 5, 17).

6.7 “And when you pray, do not heap up empty phrases as the Gentiles do [cf 5.48], for they think that they will be heard for their many words. 8 Do not be like them, for your Father knows what you need before you ask him. 9 Pray then like this:

Being the center of the center of the center of the Sermon, Pennington says, “We should expect that the Lord’s Prayer has much to teach us about the whole, and such is the case,” for it “is a model of what kind of petitions and God-orientation should mark the Christian life. It is the scaffolding around the tower of prayer or the guiding handrails along which the disciple walks in forming his or her own prayers” (222).

In the first half of the prayer (vv. 9–10) oriented toward God the Father, Jesus tells his disciples to ask “our Father” to “give us this day our daily bread” (6.11). Bread is an item that is repeated throughout Matthew’s Gospel. In Jesus’ temptation, he refused to turn stones into bread but obeyed God instead (4.3). Later in Matthew 14 and 15, Jesus feeds thousands of people with bread and fish. At the Last Supper, the bread that was broken represented Jesus’ soon-to-be broken flesh (27.17–30, see v. 28). Within the Sermon, God the Father always knows our needs and provides for us (6.10, 25–34; 7.7–11). Our Father “gives good gifts to those who ask him” (7.11).

Without giving away too many details about the Lord’s Prayer, Pennington says, “The introduction to the Prayer is an exhortation to focus on heart-driven, simplicity of prayer. The conclusion likewise focuses on the heart and inner disposition” (228). The conclusion seems to come from out of left field, especially as the conclusion to the frame. It doesn’t seem to match the introduction (6.7–8). Pennington adds that this concluding remark “is a commentary on the Prayer that is meant to drive home the weightiness of interpersonal relationships among God’s people” (229). The one who seeks forgiveness is ready to forgive from the heart (18.35).

Knowing the ways Matthew frames his whole Gospel and sections of his Gospel helps us to interpret what occurs in the middle. Keeping the larger picture in view, Pennington gives the reader an avenue for even the most difficult parts of the Sermon on the Mount.

Buy The Sermon on the Mount and Human Flourishing from Amazon 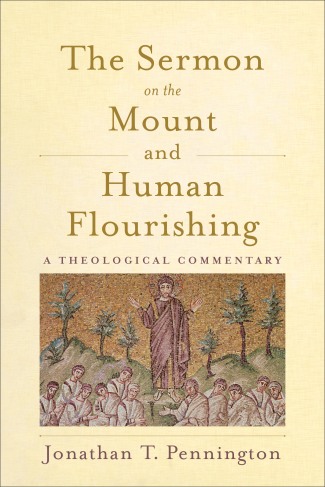 1 Pennington also says that the “flourishing” statements that make up the Beatitudes (in the Sermon—Jesus’ first discourse) are contrasted with the “woes” to the Pharisees in Matthew 23—the beginning of Jesus’ fifth and final discourse in Matthew.

2 I won’t get into how points two and three overlap (they both use 6.19–21) only to say that those three verses serve as a bridge between the two sections.

3 Amongst all of the inclusios I’ve shown, this is not to say that the Lord’s Prayer is the center of Matthew. That should be obvious (it’s the first of five discourses). Rather, it’s more likely that Matthew 13 (the third discourse) is the center (if Matthew is written as a chiasm, p. 110).

My name is Spencer Robinson. Make yourself at home and feel more than welcome to contact me. View all posts by Spencer