The Exegetical Guide to the Green New Testament (EGGNT) series seeks to bridge the gap between the Greek NT and the many tools available to study said Greek. Once intermediate students learn the ropes of syntactical terms through various intermediate grammars, where do they go from there? What do they do when their favorite commentators disagree on matters of syntax, grammar, and a text’s structure? This is where one intermediate grammar in particular gave massive help to students. Going Deeper with New Testament Greek (review here) gave students a chance to work through a text at the end of a chapter while seeing how the authors themselves worked through that text. The EGGNT series seeks to do much the same and more.

Here, John Harvey, Dean and Professor of New Testament at Columbia Biblical Seminary in Columbia, SC, leads the reader through each passage of Romans. In his Introduction he believes Paul to be the author, the letter was most likely written from Corinth near the end of Paul’s third missionary journey (AD 57), written to a mixed-but-Gentile-prominent church to “introduce himself to the church in Rome, clarify the nature of his ‘gospel to the Gentiles,’ and correct the attitudes and behavior of the Jewish and Gentile believers in the church” so that they would rally alongside Paul and support his missionary endeavors to Spain (4).

Each section begins with a brief explanation of Paul’s flow of thought, followed by a structural outline. 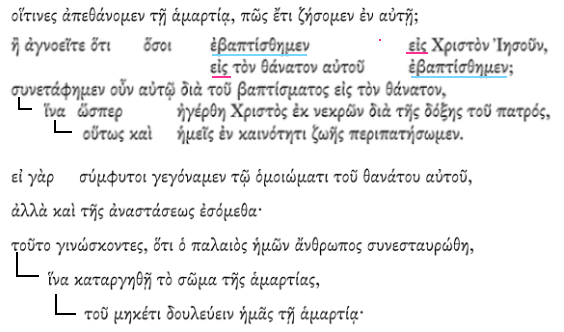 In Romans 6.2b-6 (in the larger section of 6.1-11), Harvey has spaced out the text to show his readers that the double use of ἐβαπτίσθημεν encompasses the two εἰς prepositional phrases. Other lines are indented to show subordination (the black an colored lines are my own doing). The outlines are only a visual key; they do not explain outright what kind of subordinate clauses the section has, or how certain lines relate or do not relate to others. One must go to the phrase-by-phrase explanation to understand that.

There, Harvey takes apart the text and examines it phrase by phrase. As others have noted, these books are not a reading guide. Only rare or difficult verbs are parsed, along with participles and infinitives.

Harvey does not explain syntactical terms but assumes his reader either already knows what they are or can look them up himself. For example, in Romans 6.4, Harvey writes that συνετάφημεν is an ingressive aorist. It explain the dative of αὐτῷ, which refers back to Χριστὸν Ἰησοῦν in verse 3. When a preposition comes before a word in a particular case (v. 4, διὰ + genitive), Harvey explains its function in that instance (“intermediate agency”). What is immensely helpful with this book is how Harvey brings together the thoughts of key commentators (Cranfield, Dunn, Käsemann, Longenecker, Moo, Schreiner, Stott) and grammars (e.g., Wallace). Sometimes he gives the commentators’ thoughts on a phrase, other times he merely notes the page number you will find their opinion on.When he gives different interpretive options for understanding a passage, sometimes he indicates his opinion with an asterisk (*), and other times he does not. Instead of having six commentaries spread about with you having to spend much time looking back and forth for their opinions, Harvey puts it in front of you in one paragraph. This won’t give you every answer, but rather the most likely way to understand the text’s syntax.

At the end of each section, Harvey lists a host of bibliographic references for further study according to relevant topics (95 total) found in that section. Concerning the “I” in Romans 7 (7:7-25), Harvey lists 27 different references. He lists 25 different references under the topic Predestination and Election (8:29), 21 under “All Israel Will be Saved” (11:26), and 17 under Adam/Christ Typology (5:12-21). Not all topics have so many references, but all are a massive help. If you’re writing a paper or a sermon on a particular topic, begin by looking here.

The next section offers Homiletical Suggestions for the pastor/teacher. These won’t always fit depending on how you’re structuring your sermon, but they are a helpful for seeing the text divided up a different way from your own conclusions (since you will be doing your own exegetical work first, right?).

Those well into the intermediate stage of Greek would do well with this. The structural outlines, numerous bibliographic sections, and homiletical suggestions alone make this worthwhile for teachers and preachers. This does not replace learning koine Greek itself. While the book has been helpful for me, I have forgotten a lot on syntax, so his syntactical notes always lead me back to various grammars. I usually look at Harvey’s syntactical notes first just to give me a springboard to bounce off from. If he notes that a word is an ingressive aorist, I’ll write it down and then look up the different ways the aorist tense functions and see if I agree. For those further along than me, Harvey cuts down a lot of your preparation time (though you do still need to translate the text). A multifunctional book like this gives a lot of information to chew on and to incorporate into one’s teaching. I think Harvey has done a great service for pastors and teachers with this volume.

Buy it from Amazon, Adlibris, or B&H Academic

Disclosure: I received this book free from B&H Academic. The opinions I have expressed are my own, and I was not required to write a positive review. I am disclosing this in accordance with the Federal Trade Commission’s 16 CFR, Part 255 http://www.access.gpo.gov/nara/cfr/waisidx_03/16cfr255_03.html.